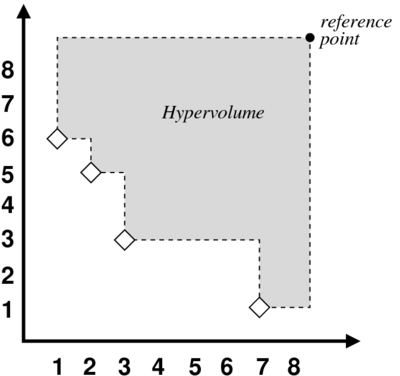 Computation of the Hypervolume Indicator

The performance assessment of algorithms for multiobjective optimization problems is far from being a trivial issue. Recent results indicate that unary performance measures, i.e. performance measures which assign a single value to each non-dominated point set, are inherently limited in their inferential power. Despite these limitations, the hypervolume indicator (also known as Lebesgue measure or S metric) is still considered to possess some reasonable properties, having also been proposed as a guidance criterion for accepting solutions in Multiobjective Evolutionary Algorithms. Therefore, the computational time taken for computing the hypervolume indicator is a crucial factor for the performance of such algorithms.

This program implements a recursive, dimension-sweep algorithm for computing the hypervolume indicator of the quality of a set of n non-dominated points in d dimensions. It also incorporates a recent result for the three-dimensional special case. The proposed algorithm achieves O(nd-2 log n) time and linear space complexity in the worst-case, but experimental results show that the pruning techniques used may reduce the time complexity even further. The program assumes that all objectives must be minimized. Maximization objectives may be multiplied by -1 to convert them to minimization.

In GNU/Linux, the program can be compiled from source by invoking

The command-line tool can now be compiled in Windows with the GCC version provided by MINGW.

We recommend that you compile it specifically for your architecture. Depending on the compiler and version of the compiler you use there are different ways to achieve this. For recent GCC versions, make will pick a suitable -march argument based on the processor of the build machine. This can be overridden by passing an MARCH= argument to make. Similarly if you use the Intel C compiler, it will pick a sensible default architecture (-xHOST) for you. If you want to override this, pass XARCH= to make. So to build for an Intel Core2 you would use

if you are using the GCC compiler and

for the Intel C compiler. Generally make will try to pick good flags for you, but if you need to, you can override them by passing a OPT_CFLAGS argument to make. To build an unoptimized version of hv you could run:

Finally, if you do not want to see the command line of each compiler invocation, pass S=1 to make.

The program reads a set of points provided by filenames in the command line:

In the input files, each point is given in a separate line, and each coordinate within a line is separated by whitespace. An empty line denotes a separate set. (See also the --union option). The program assumes that all objectives must be minimized. Maximization objectives may be multiplied by -1 to convert them to minimization.

A reference point can be given by the option -r.

If no reference point is given, the default is the maximum value for each coordinate from the union of all input points.

For the remainder options available, check the output of hv --help.

This program is distributed in the hope that it will be useful, but WITHOUT ANY WARRANTY; without even the implied warranty of MERCHANTABILITY or FITNESS FOR A PARTICULAR PURPOSE. See the GNU General Public License for more details.

IMPORTANT NOTE: Please be aware that the fact that this program is released as Free Software does not excuse you from scientific propriety, which obligates you to give appropriate credit! If you write a scientific paper describing research that made substantive use of this program, it is your obligation as a scientist to (a) mention the fashion in which this software was used in the Methods section; (b) mention the algorithm in the References section. The appropriate citation is:

Moreover, as a personal note, I would appreciate it if you would email manuel.lopez-ibanez

manchester.ac.uk with citations of papers referencing this work so I can mention them to my funding agent and tenure committee.